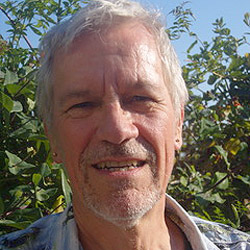 Hugh’s first film Begging the Ring won the Grierson Award and was screened by the BBC, beginning a long career as a screenwriter. Other films followed with the same director (Colin Gregg) including To the Lighthouse with Rosemary Harris and Kenneth Branagh (Bafta nominated), Remembrance with Gary Oldman and Tim Spall (Grand Prize Taormina), and We Think the World of You with Alan Bates and Gary Oldman.

In the 90s came Hugh’s original mini-series The Big Battalions (Carnival Films / C4), starring Brian Cox, and his feature-length film The Mill on the Floss, with Emily Watson (BBC-1). These were followed by his crime drama Dialogues of the Dead also for BBC-1 (RTS Best Drama Award.) His new feature is Waiting for You, with Colin Morgan and Fanny Ardant, seen recently in a sell-out screening at the East London Film Festival.

Come out of your safety zone and inspire each other."