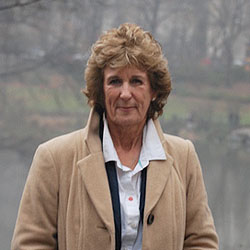 Jackie joined the police service in 1970 and served most of her service in the Criminal Investigation Department, investigating all aspects of crime including armed robberies, rape, murder, fraud, arson, blackmail etc and is a trained hostage negotiator. She served on The Flying Squad, as the only female amongst forty men.

Since leaving the Police Service Jackie, has been employed working as a story consultant on many of the major police drama’s seen on TV screens. She has an MA in Creative Writing and her first play Be Mine was transmitted on Radio 4 Play for Today in 2012. Jackie has also written an episode of Suspects for Channel 5, is currently working in development with various TV companies and has been a presenter on a Radio 4 documentary entitled Women in Blue.

Her latest involvement as police consultant is with Hillbillys Production, The Level, written by Gaby Chiappe & Alex Perrin which will be aired shotly on ITV.

Jackie also has an MSc in Addiction Psychology, and for the last ten years has been facilitating weekly addiction groups plus 1-1 work in a male prison.

Worth every penny! I love everything about LSF and there’s always a great atmosphere thanks to the hard work of the team."